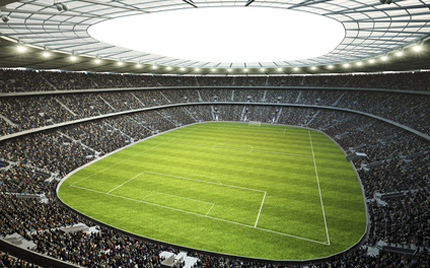 The Football World Cup in Brazil has generated a new sense of love and excitement for the otherwise cricket-crazy India which is steadily catching up with the planet's favourite game — both as a sporting nation and as a market for advertisers seeking a fan base. The viewer ship numbers have shown a steady increase as more and more Indian Football fans have taken up to the new sport. Hope that this love remains or better strength in September when the much talked about INDIA SUPER LEAGUE gets under way.

IMG Reliance and the big stardom franchise are betting big to change the profile of the game and increase the numbers and attract more viewers to the stadiums and in front of their TV's.

On an international level, Germany is one of the most successful football playing nation. The German football eco-system and administration at different levels does not need any introduction.

After the Euro 2000 defeat the DFB in 2001, compelled all Bundesliga clubs to set up academies – with grass pitches, floodlights, artificial pitches, youth teams from Under-12 to Under-23s – as a condition of their licence. In 2002 this was extended to Bundesliga II clubs too. These academies are not merely the property of the clubs, either, they are part of the great cooperative effort of German football. They are overseen by the academies committee, made up of representatives from the DFB, DFL (German Football League) and some Bundesliga clubs.

They have had money thrown at them too, with the clubs spending over €100m on youth development each year now, and over €500m since their establishment.
In 2002, before the changes kicked in, the Bundesliga was 60 per cent foreign. Now it is 60 per cent German, with more than half the players educated through the academies, where they live and are schooled from a young age. The production line is feeding clubs and the impact is obvious.

Indus Media researched the prospect of an Indo-German collaboration to develop and enhance the potential of football in India. The aim of this preliminary exercise was to understand the interest of all the stakeholders and to evaluate the commercial viability of the project.

The study tour with representatives from the Indian football clubs and other stakeholder visited Germany in order to understand, benchmark, collaborate and benefit from the success and know-how of German football system.

Areas covered under the study tour

Format of the Study Tour

The study tour consisted of workshops, conference, business meetings and most important visits to clubs, stadium and training facilities.